The Victorian penal treadmill or ‘Discipline Mill’ [1]  is probably one of the most recognised of all Victorian punishments.

Introduced into prisons originally to combat idleness in prisoners, eventually becoming feared by even the hardest of inmates.

If a criminal’s sentence consisted of  ‘Imprisonment with Hard Labour’, chances are the treadmill would have played a part in their hardship somewhere along the line.

The treadmill or ‘everlasting staircase’ was introduced into Britain’s prisons in 1818 by civil engineer Sir William Cubitt.  Originally designed to occupy men’s time while serving their prison sentence, the power generated by the inmates was eventually put to better use for grinding corn or pumping water throughout the prison.

A typical shift on the treadmill was between 7 am – 4 pm with prisoners expected to take 56 steps per minute in some instances, being allowed a five-minute rest every fifteen minutes. The treadmill was eventually abolished in 1902.

But do we really know the ‘ins and outs’ of the contraption that was feared by many and that could cause serious harm, or even death, if not respected during use.

In this post, I’ve taken a closer look at the treadmill to see how it was used and consider what our ancestors may have gone through if they spent time in prisons in England that harnessed the device’s power.

This post was inspired after I’d been researching three body snatching cases in Northleach House of Correction, Gloucestershire. It was a great post to write, especially after stumbling on some terrific descriptions of body snatchers in the prison registers.

A Brief History of the Victorian Treadmill

Considered by many to be one of the cruellest forms of punishment within the justice system, the treadmill, at first did nothing more than turn, revolution after pointless revolution, occupying the time of those ‘idle prisoners’ that Cubitt had observed at Bury St Edmunds Gaol in Suffolk.

The simple design of the treadmill was intended to put this idleness to good use, and was seen as a way of ‘reforming offenders by teaching them habits of industry’

As time progressed,  the power generated from the treadmill was harnessed in more productive ways,  with many prisons adopting the treadmill to power corn mills or water pumps.

With the passing of The Prison Act in 1865, any male over the age of 16 that was imprisoned and sentenced to Hard Labour, had to spend at least three months of this time in ‘ labour of the first class’.

This often meant large amounts of time on the treadmill, but other forms of Hard Labour were used just as frequently, most commonly the equally mind-numbing ‘crank machine’.

How a Victorian Treadmill Worked

The treadmill itself was essentially a large cylinder that had been purposely adapted to incorporate a series of 24 steps. Equally spaced, these steps, positioned about 7”/18cm apart, were designed in such a way that the men, and later women, would have turned the wheel simultaneously.

In a nod to health and safety, handrails were fitted to treadmills, and to add further to the punishment, men were sectioned off and isolated from each other.

Some treadmills, like the one in the House of Correction at Holloway, had a small bell attached to it which rang every two and a half minutes to indicate that a certain number of turns had been performed.

Accidents on treadmills were commonplace and mainly occurred through sheer exhaustion. Lose concentration for a mere second, and your feet could miss the step and you’d lose your teeth as the steps of the treadmill made contact with your face.

Leading social reformer, Henry Mayhew,  in The Criminal Prisons of London[2] mentions the use of handrails, as well as the loss of concentration during his visit to Holloway:

‘Each man, on going to the wheel, steps up on a form in front and thence plants one foot on the wheel at the same time laying hold with his hand on an iron handle to keep himself in an upright position.

In the event of his not keeping pace with the wheel, he is brought down, and liable to be injured. From the motive of self-preservation, he is compelled to keep pace with it.

Henry Mayhew ‘The Criminal Prisons Of London, and Scenes of Prison life’

Imprisoned for his sexual orientation in 1895, he would spend two difficult years between Pentonville and Wandsworth Prisons where he would have been assigned to the treadmill for a period of six hours a day.

On his release, it is said he was a broken man and never quite recovered from his period of confinement. He passed away a few short years later in 1900 at the age of 46.

A Typical Day on the Treadmill

A search through most books on the subject of Britain’s prisons will regale tales of eye-watering distances covered by these men during a regular ‘shift’.

One favourite account, noted in ‘The Times’, is said to have occurred at Warwick Gaol where prisoners walked a staggering 17,000 vertical feet over a ten-hour period.

To help put this into perspective a little, helicopters typically fly at an altitude of 10,000ft, or, for a more international feel, I have also seen this quoted as being the equivalent of walking up to the top of the Empire State Building 13 times!

But Warwick was an exception and no doubt those cashing in on the sale of the milled corn would have been highly delighted with their efforts.

But what about a more average day on the ‘wheel’?

Average Time Spent on a Treadmill

‘The tread-wheel labour generally lasts from seven o’clock in the morning till four o’clock in the afternoon, with the exception of hours spent in chapel, at meals etc. The prisoners are employed on the wheel on an average of four hours and a half per day.

The average amount of distance travelled by the prisoners …is about 6500 feet in winter, and about 8700 feet in summer – much below the maximum height allowed by law which is 11,000 ft

A much lower distance to that given by Warwick!

Another example, again taken from Warwick,  reported that inmates were expected to take up to 56 steps per minute, with rest periods of a brief five minutes taken at ten-minute intervals

And finally, at Gloucester, a white step would appear at marked intervals on the wheel to indicate that it was time to step off and take a well-earned break.[4] Something which by all accounts would not have been missed.

Although according to reformer Mayhew, if the inmates at Holloway were anything to go by they would be ‘in no way exhausted with their day’s task’.

The Victorian Treadmill Being Put to Good Use

The rather pointless exercise of operating the treadmill for purpose’s sake can perhaps best be summed up during Mayhew’s visit to Coldbath Fields where he noticed a ‘tread-wheel fan’ as he was leaving the premises.

The fan was set up in such a way as to create resistance against the prisoners walking the treadmill and they would be moving nothing but air. It would eventually lead to the phrase ‘Grinding the wind’

t’s interesting to see in the footnotes of Mayhew’s work here. He mentions that the prison, despite having inserted adverts into ‘journals’ wishing to lease the treadmill’s power, unfortunately, had had no takers.

This wasn’t to be the case for long, however, and prisons soon started to harness the power that was produced day in day out and put it to good use.

Mainly used for grinding corn into flour, the prisons listed below are just a few of the of those that began utilising the treadmill in a more enterprising manner.

The Impact on Prisoners and the End of the Treadmill

Despite the gruelling regime of being on a treadmill and the obvious physical effort required, it was still thought of as a positive solution to idleness.

Even the inventor of the contraption, William Cubbit, didn’t seem to think there was any effort in operating the machine.

A stint on the treadmill used up 2000 calories a day, something that would never have been replenished on the meagre prison rations dished out at the majority of Britain’s prisons.

And for many prisoners, the thought of being put onto the treadmill was too much for them and there are reports of prisoners being reduced to tears after a day spent concentrating on the contraption.

Prisoners soon became weary from the constant exertion and it was not unknown for prison guards to mistreat those prisoners who failed to keep up the pace.

By the 1890s, Victorian treadmills used in prison had lost their purpose altogether. They were no longer utilised for their power and were there purely to cause suffering to the prisoner who had to use it.

Treadmills were finally abolished in 1902.

Resources and Taking it further

[1] ‘Description of the Treadmill Invented by Mr William Cubbit, of Ipswich, for the Employment of Prisoners…’  You can access this pamphlet for free via the Hathi Trust Digital Library website and a direct link to it can be found here. I’d recommend even just a cursory glance over the document as it really does offer a great insight into Cubbit’s machine.

[2] Free access to Henry Mayhew’s ‘The Criminal Prisons of London and Scenes of London Life’ published in 1862 can be found on the website archives.org

[3] ‘Past Time: A Learning Resource about Victorian Prisons’ is a great resource for all things connected with Victorian Prisons. The pack would be especially useful for teachers involved with GCSE students or someone perhaps running a local history group as suggested on the learning pack and it is available from Warwick University website A Short tale about the time notorious London body snatcher Joseph Naples broke out of prison. 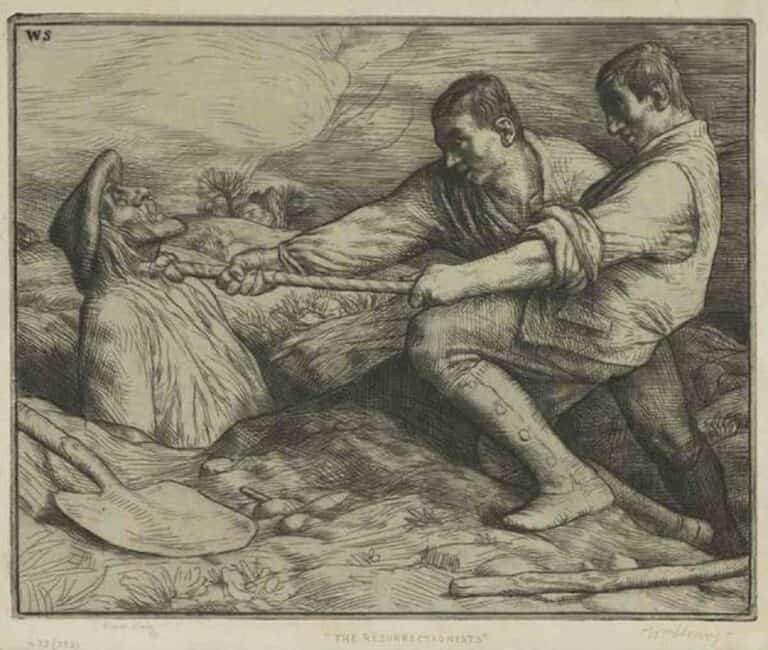 In this guest post, discover the story of the man they called ‘King of The Ohio Body Snatchers’, a man named William Cunningham, AKA ‘Old Cunny’.